Looking for your next fantasy read? Perhaps you’ll find what you’re looking for in The Door Keeper. This novel seems intriguing on multiple levels. Check out its blurb to see what I mean:

Eden Saunders is a single mother who has learned to accept tragedy in her life. Her mother died during childbirth and her husband was killed just three years after they married. Eden’s existence revolves around raising her ten year old daughter, Gabby. But when she is curiously prompted to look into her unknown lineage, Eden finds herself desiring things she has suppressed most of her adult life: adventure, love, and destiny.

In discovering where she came from, Eden inherits a key from her deceased mother that opens doors to worlds beyond her imagination, including the world that should have been her home. The only thing stopping her from exploring them is the fear of leaving her own daughter behind. The Door Keeper explores the circle of mother/daughter legacies, and the bond that unites them – a bond that even death can not break.

Interesting, right? The Door Keeper hits shelves in just a few months; it’ll be available for purchase starting 23 January 2017. Today, its author — Steen Jones — is with us in the virtual studio. 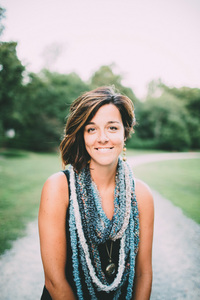 1. Tell us a little bit about yourself.
I was born and raised in Woodstock, Georgia and currently live just a few miles north of where I grew up. I am a wife, mother, writer, business owner, and artist; mostly in that order. I married my husband super young, so my adult life has mostly consisted of raising my two amazing, special needs kids. Fun fact: I like to sing my activities. “Washing the dishes…these plates are disgusting!” (You can imagine your own tune…)

2. When did you start writing?
I actually just started writing within the past 2 years. It has always been something I enjoyed, but for whatever reason never thought about pursuing it as a career.

3. Why did you start writing?
I finally decided to begin writing when this book idea wouldn’t stop developing in my mind. One day, while driving, I saw a door on the side of the road that sparked my imagination. The more I drove past it, the more notes I would jot in my phone. Before long, I had developed the main characters and plot. To be honest, I just couldn’t stop thinking about it.

4. How different is the final product (the book) from your original vision? That is, did the structure and content of the novel change with the passage of time?
It is absolutely different than I had originally thought. In my current book, the main character finds out she is connected to doors that lead to other worlds, worlds that have existed for centuries. In the first couple book ideas, she actually created the worlds beyond the doors, which would have lead to tensions between her imagination vs reality. It could have been an interesting concept, but my current story just felt more relatable.

5. Does your story have a moral?
Yes! There are actually a couple. One of the main morals is the importance of balance. Balance within yourself, as well as family dynamics. The main tension of the novel is motherhood; more specifically, the tension between being a mother and fulfilling a destiny outside of your family/children. Can you do both well? Do we have to sacrifice one for the other? These are the questions my main character wrestles with, and honestly, questions I think all mothers wrestle with at some point. I know I did.

6. Of the characters you’ve created, which one is your favorite?
I would have to say, Gabby, my protagonist’s daughter. The main reason is that I based her largely on my own daughter; the most beautiful, talented, and funniest kid ever. She deserved to be immortalized in the written word, so I was happy to oblige.

8. What does a typical writing session look like for you?
Ah, I love a good writing sesh. I either like to write in the morning, in my cozy basement, after my coffee with music playing. Usually something instrumental and European (The Album Leaf or Sigur Ros.) ­-OR-­ I like to write in bed late at night after my kids have gone to bed with a glass of wine. Writing wise, I need to be alone. But, I do love to brainstorm and world build either outside, in nature, or in public places.

9. What is your favorite book genre?
I love fantasy and science fiction. In truth, I just love a good escape. Using my imagination and reading about a new fictional world is one of my most favorite things. Lord of the Rings and The Chronicles of Narnia are some of the best world building in my opinion. I could, and have, gotten lost there for weeks on end throughout the course of my life.

10. What are you currently reading?
I am currently reading Grey, book 1 of the Romany Outcast Series by Christi J. Whitney. She is another author from North Georgia: us locals have to stick together.

11. Any project in the works?
I’m enthusiastically working on the sequel to The Door Keeper.

12. How long do es it usually take you to write a book?
I wrote The Door Keeper in a year, but editing could have lasted forever had I let it!

13. In your opinion, what makes a story ‘good’?
To be honest, anything I get lost in, can’t stop reading, and think about for the next couple days after finishing. Those 3 things tell me it was a good story. The writing isn’t as important to me…but story is everything.

14. What advice would you give to aspiring writers?
If this is something you really want to do; patience is key. No one likes to hear it, but it’s true. Write what you love, and don’t stop. Don’t attempt to do it for the money or you will give up or burn out. Just do it to tell a good story, then you will always be satisfied, regardless of the outcome.

And now for a game of “Which Do/Would You Prefer?”
1. Books or movies?
Believe it or not, movies.

4. Making a phone call or sending a text?
Text! (Emojis)

5. Losing all of your money or losing every picture you’ve ever taken and every picture that  has ever been taken of you?
Lose the money, for sure!

10. Having your car break down on an extremely busy expressway or along an abandoned road in the middle of nowhere?
Middle of nowhere; could lead to a good book idea.

12. Drinking a glass of expired, curdled milk or eating a bowl of cold, slimy worms? (Note: the worms would be dead, though not cooked.)
Cold slimy worms, at least it’s protein.

13. Spending half a day locked in a coffin (there would be a hole for air, of course) or spending two days trapped at the bottom of a well?
Half a day in coffin…