Coffee with Architects of Worlds Afar is excited to welcome J.P. Cawood, author of Love from Mars and Sam & The Secrets of the Universe. The former title, Love from Mars, is a romance novel with science fiction elements, and it’s currently in the running to be published on Kindle Scout. Let’s take a look at its blurb: 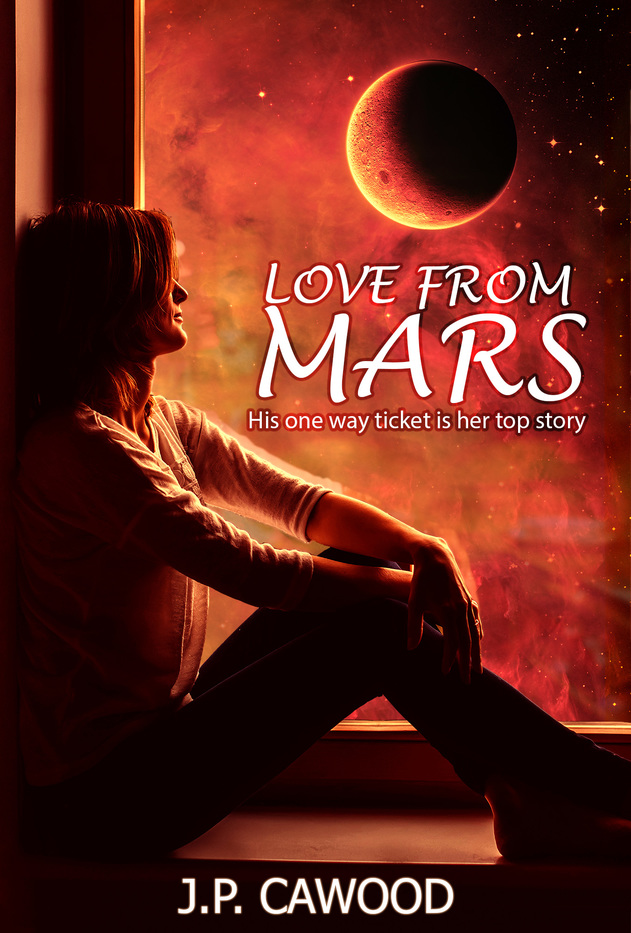 Six people have been chosen to colonize Mars, including the charismatic and noble Ryan Clarke. Emma, a headstrong reporter, meets Ryan at the Martian Six press conference. Despite the fact that he has a one-way ticket to another planet, they can’t resist their undeniable connection. Their whirlwind romance is rocked by one shocking revelation after another as the mission prepares to launch. Let the countdown begin…

Sound interesting? Want a chance to win a FREE copy? Great! All you have to do is click here and nominate Love on Mars to be published on Kindle Scout. If Love on Mars wins, everyone who nominated it will receive a copy of the novel. You have until 7 November 2016 to cast your nomination.

1. Tell us a little bit about yourself.
I’m originally from Milwaukee, WI and came out to Los Angeles to go to USC film school. I’ve worked in film and TV development for the last ten years and have sold series & pilots to Syfy Network, Lifetime Movie Network, Investigation Discovery, History Channel, and Destination America. Most recently, I created TLC’s hit show My Giant Life, which recently aired its second season. I’ve written and story consulted on screenplays in the past, but only recently decided to focus on writing books.

2. Do you recall the moment you first conceived the idea for your novel?
The idea for Love from Mars came to me in a dream. It played out like an entire movie as I slept. When I woke up the next morning, I raced to write it down. As I sat down to write the book, I took my initial dream notes and fleshed them out into an outline. The story has definitely evolved and fleshed out from the initial dream, but the major elements were all there from the start. Working with beta readers has been helpful to further flesh out story beats that were weak or needed more development.

3. Does your story have a moral?
Love from Mars is a love story about a couple that faces unbelievable obstacles to be together. It’s about creating a spiritual connection that is so powerful it has the ability to transcend space and time. There are metaphysical and spiritual elements that point to the endless possibilities of the Universe. Belief in those possibilities is the first step toward making them a reality.

4. How do you feel about outlines? Are you for or against them?
I strongly recommend outlines and use them for everything I do, even reality TV concepts. It’s a great way to get your ideas down on paper and refine the overall arc before diving into the actual writing.

5. Any project in the works?
I’ve written another book called Sam & The Secrets of the Universe. It’s a science fiction fantasy and the protagonist is a fifteen-year-old boy who has died on Earth. He wakes up on a strange planet and is given the opportunity to learn the secrets of the Universe. If he passes his tests, he’ll graduate to the next level. If he fails, he’ll be “Reset.” It’s a cosmic adventure that involves Black Holes, atomic particles, and the Anti-Universe. I plan to release that very soon. For updates on this project and more, sign up for my newsletter at http://www.jpcawood.com

And now for a game of “Which Do/Would You Prefer?”
1. Dogs or cats?
I have a cat named Ananda. Her face is split perfectly down the middle; one side orange and the other black.

2. Summer or winter?
Summer. I live in LA because the weather is perfect all year long.

4. Making a phone call or sending a text?
Text. The only people I usually talk to on the phone is my family.

7. Bungee jumping or going on the slingshot ride?
I love rollercoasters and rides so definitely the slingshot. Where do I sign up?

10. To never again eat a piece of chocolate or to never again drink a cup of coffee?
I don’t drink coffee. I prefer tea. I call it my life juice.

Thank you for joining us, J.P.!
Readers: want to connect with J.P.? You can find her on Twitter, Goodreads, and Facebook. Also, be sure to check out her author website.