I am thrilled to announce that the author of The Dice of Fate, Rohvannyn Shaw, joins us today to talk about her novel. Before we meet her, let’s take a quick look at her book’s blurb: 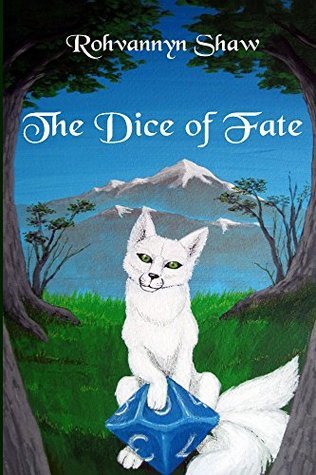 It is another average day working the phones in the call center, and Sanae is prepared for another long day of nothing interesting happening. When she suddenly finds herself stranded in the middle of a mysterious forest, far away from everything and everyone she knows, she has no choice but to explore the new land and meet whatever strange creatures might dwell there. Luckily, she hasn’t forgotten her sense of adventure, and she tackles the new challenges with vigor. But for each answer she finds, there are new questions. What brought her here? Will she ever return? And if she could, would she want to go? One thing is certain, Sanae will never be the same.

(Note: The Dice of Fate is suitable for all ages. It is the first installment in a trilogy.)

1. Tell us a little bit about yourself.
I live in Tucson, Arizona. I lived in the Pacific NorthWet for around 30 years before deciding that the webbing between my toes needed to dry out. I like to draw and paint, make greeting cards, write of course, both short stories and novels. I also blog and I write real letters with my fountain pen. I work in customer service because it pays the bills and also inspires my humor writing. I enjoy heavy metal and Celtic folk music, and I do everything my calico tells me to. I have a partner who is very dear to me. Lately I’ve developed a passion for photography. I love seeking out all the little bits of undiscovered beauty in my beloved Sonora Desert.

Here are a few random facts about me: Once, I sneaked up on a cat who was hunting a mouse, and caught both cat and mouse. Both were surprised. I lived for a year at a small municipal airport. I soloed a plane before I ever drove a car by myself. I was once caught in a Monsoon flood and my car was nearly swept away. I used to take notes in history class using a dip pen. I wrote my first completed novel, at work, between calls.

2. When did you start writing?
I think I made my first real attempt to write when tried to write a Star Trek novel. I was around 12. It was really, truly terrible and all done in longhand – I think I managed seventeen pages. I started writing a lot more in college, when I had time and privacy, and things to inspire me.

Honestly, age and growing patience helped my writing the most, along with a greater ability to type. I wrote most of a novel in my twenties and still have plans to finish it someday, it’s really not bad for an early work. Life experience has helped make me a better writer too. I’ve dabbled in writing articles for magazines as well, a practice that led directly into my blog writing. I started writing seriously, strangely enough, during NaNoWriMo a few years ago.

3. Why did you start writing?
I started writing my novel, The Dice of Fate, for three main reasons. One, I had an idea rattling around in my head. I wanted to start a story and just see where it went. Two, I was posting on a site that paid per view and I wanted to have new content every day. Three, I was really inspired by NaNoWriMo, and I badly wanted to finish a novel – finally!

4. Do you recall the moment you first conceived the idea for your novel?
I’d been going through my idea file, looking for novel ideas, and saw one that I’d been kicking around for years. You see, whenever I get an idea for a story I try to write it down somewhere then transcribe it into this little text file, so if I need an idea I’ll always have something. When I looked in that time, there it was!

5. How different is the final product (the book) from your original vision?
It’s definitely different. Originally the story was going to be about a gaming group who was transported into the world of their RPG, and they’d have to live out all their scenarios with the rattling of their Gamemaster’s dice going when anything significant happened.

6. Tell us a little bit about your book’s title.
The title almost helped write the story. It came with the original idea, and even though the story itself morphed, the title stayed the same. The idea just kind of popped up in my head one day, and has actually been around for quite a while in my notes. I think the file is four or five hard drives old!

Originally I was going to call my novel “The Bones Of Fate.”

7. Does your story have a moral?
Generally, the moral is “we make our own destiny.” The main character goes through a lot and learns about how even though she may have had really strange things happen to her, she still has control over how she reacts and what she does to change her situation. The story is ultimately about empowerment, but not in a preachy way. When my main character was dumped flat footed into the world she landed in, she could have given up or freaked out. She thought about it, but ultimately, she started walking and looking for ways to survive. So it went, till the end.

8. Of the characters you’ve created, which one is your favorite?
I think I like the young dragon, Khurriath, the best. He’s such a geek, and he collects rocks and treasures but can’t really carry much with him. I had fun creating him and I want to tell more of his story. I also like showing how he grows during the course of the plot, and become more self reliant.

9. Using five words or less, describe the protagonist in The Dice of Fate.
A curious wanderer, set adrift.

10. What does a typical writing session look like for you?
I write when and where I can. I might grab an hour on a weekend morning when my partner is doing a render, or log in to FastPencil at night when the calls don’t come in as fast. I have to be good at starting and stopping quickly and dealing with lots of interruptions. At home, the interruption might have orange, black and white fur and a floofy tail. I don’t set daily goals for myself unless it’s November.

11. How do you feel about outlines? Are you for or against them?
I love outlines. I never finished a novel until I started using them. Though I’ll make changes before I’m done with the novel, I find they are an awesome way for sketching out the shape of the story so I don’t forget where I’m going, where I want to end up, or just get lost in the narrative. Making an outline for that moment when you get the most amazing idea but know you won’t have time to get it all down in one sitting. You can include notes for mood or character actions in your outline, so you don’t forget things later, or even sketch out individual scenes so you capture the freshness of your idea.

12. Any project in the works?
I’m working on “Silverwings,” a fantasy novel about a Magician’s apprentice who finds a winged mare in the forest and has to protect her from her cruel former master. I’m also working on completing the last few chapters of “Rageth,” a comedic horror story about two metalheads and a nurse who have to deal with a supernatural creature that invades the Tucson city electric system. Farther out, I’ll be finishing “blood tide,” a science fiction story set on a desert world many years after a civilization collapse. I’m also roughing out a non fiction collection of stories about people who decided to take control over their own destinies. It will be called “From Humble Beginnings.”

13. How long does it usually take you to write a book?
Anywhere from a few months to a decade or more, depending on the book.

14. What advice would you give to aspiring writers?
Don’t give up. Persistence trumps talent almost every time. Keep learning, keep growing, keep reading other people’s work, always think about how you can make your own work better. Play, but don’t forget to think. Know why you do everything. Learn about the world and let that enrich your own writing. And don’t forget – never give up.

And now for a game of “Which Do/Would You Prefer?”
1. Books or movies?
Books!

3. Summer or winter?
Summer. I moved to a place called Dry Place, after all!

4. Ebook or physical book?
Ebook – for portability and that way I never have to lose my library again.

6. Having telepathy or having telekinesis?
Telekinesis. It would be neat to have and wouldn’t threaten my sanity!

11. Going without internet access for a week or going without watching any movies/television shows for a week?
*breaks into cold sweat* No internet? How horrible is that? I need my net. And I already don’t watch Movies or TV shows except for special occasions.

12. To never speak again or to never eat solid food again?
I’d buy a blender and yak away.

Thank you for joining us, Rohvannyn!
Readers: want to connect with Rohvannyn? You can find her on Goodreads and Facebook. Also, be sure to check out her author website and blog.