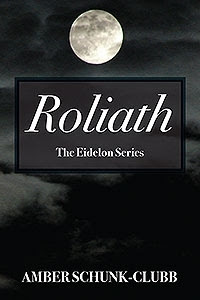 What if you were to find out that nearly everything you know about vampires is inaccurate? They can’t venture outside only at night, they do have reflections, they refer to themselves not as vampires but as Eidelons, and they don’t drain humans of all of their blood; as a matter of fact, killing humans is absolutely forbidden. Most interestingly, much like humans, their society is an organized one marked by the presence of different races and clans.

Roliath tells the story of Geannifer Whitlence, a vampire whose clan finds itself embroiled in a perpetual state of conflict. It is largely an origin story that relates how Geannifer came to be and which promises to take readers into a world quite unlike any other they’ve encountered before. With us to further discuss this novel is its author, Amber Schunk-Clubb!

1. Tell us a little bit about yourself.
Well…I’m originally from Colorado, I was born and raised there until I was 16 and I miss it often. When I left Colorado I moved to California and resided there for about 13-14 years. But I now currently reside in Missouri with my husband and two stepchildren. Roughly two years ago, my insanely awesome husband presented and gave me the option to leave my job so I could stay at home and actually concentrate on my writing. Since then, not only have I finished writing Roliath and went through the process of getting it published and on the market… aside from editing, book 2 in the series is finished, book 3 is nearly halfway done and books 4 and 5 are already mapped out just waiting to find their way to my keyboard. If it wasn’t for my husband giving me this opportunity I would not be as far as I am with The Eidelon Series. Before I met and dated him I was always working, working, working. In fact, when I lived in California I often worked two jobs at a time. Whenever I had free time, I would write, and worked on the first book. But, I never really had a lot of free time between work and life. For nearly 11 years, off and on I continued writing the first book and created storylines, characters, the world of Eidelon, everything I needed to have for a complete 5 book series…I just never had the time to write them. Not that I can look at that as a bad thing though, because it was just that…what that 11 years did give me, was the time to creatively imagine, mold, twist and create this series. Lack of ideas and content on where to go with each book will never be a problem for me.

2. Do you recall the moment you first conceived the idea for your novel? On a related note, how different is the final product (the book) from your original vision?
Actually…I can recall that moment! When I was in high school I was always taking specialty-writing classes whenever I could to help further my love for writing. Roliath started out as a class assignment, an eight-page, hand written short story called “Become What You’re Supposed To Be”. (I got an A+ by the way) The theme of it always stuck with me though and the more my mind thought about it, I knew I could do so much more with it. Believe it or not…it actually started out as a typical vampire story, with the same type of view we’ve always had on them. But, it was the storyline that I put most of the concentration on vs focus on the typical lifestyle of a vampire. Over a couple more years it became a typed story titled “Survival”. I left it alone for a while, but still with the feeling it was falling short. Towards the end of my Senior year in high school I started to work on it more and more and grew the storyline, characters, everything. I think I got to about 160 or so pages, typed, when I started to gain a new perspective on things and toyed with the idea of creating a new view on vampires. Which, in my opinion, turned out to be a great thing, and a cool idea and all…but left me realizing I had 160 pages to re go through and change things up…by quite a bit. And so I did, after I got those pages caught up and continued working on it over the years, I’ve probably changed the theme to how it would all work, 5 or 6 times before I settled on a final idea/theme. From there I spent what free time I had to create the world of Eidelon around that decision and what I needed for a 3 book series, three books was my minimum goal I set for this. But as more time passed and the storyline grew on where I could go with it; I realized that I could turn it into a five book series instead.

3. How did you arrive at your book’s title?
Book 1 in The Eidelon Series is called Roliath. Roliath is the name of the town that the main character ruled over both as an Eidelon as well as a cover to the mortals. In a small sense, this book is somewhat an Origin story for the main and side characters, how they met, how they got to where they are today…etc…Roliath is where most of the story takes place at, the main root as to why the main character met her solid group that has been with her for the last two hundred years…so, with that being said, (and changing things up several times for the theme of it all) I chose to change the title from Survival, to, Roliath.

4. Of the characters you’ve created, which one is your favorite?
Picking a favorite for anything has always been a challenge for me. But, I guess I would have to say the main character, Geann. (Geannifer) Not only is she an Eidelon (a vampire), but she’s a special one at that. Not only do the trials and tribulations she’s put through make her unique…but her talents and capabilities as an Eidelon are astonishing, even to other Eidelon. What you as the reader learns of her abilities in Roliath is only the beginning, there is more to come.

On the other hand…Sherriff Dewit was one of my favorite characters to actually write. He may technically be a bad guy and all from the beginning, but, it was fun to bring out an un-characteristic side of him to life that might make you think twice about him.

5. What does a typical writing session look like for you?

Sometimes yes, lol. Actually I listen to music, or I have the tv on in the background, but both are normally set at a very low volume. I don’t like to write in complete silence, but, I like to have enough sound to not become a distraction.

I don’t really have a set time, but I guess most of my writing is done in the afternoon. However, there has been many times after I have my first cup of coffee in the morning and I think about a small detail to one of the books and I dive right in. But then there are those few late nights, nights when I can’t sleep and I’ll find myself at the keyboard typing away as well.

6. How do you feel about outlines? Are you for or against them?
I’m all for them. Then again, after 11 years of creating a 5 book series and no time to write it all out, how could I not be, all for outlines? Of course, I’m not sure if what I have are outlines, or just pages upon pages of notes that probably wouldn’t make sense to anyone but myself? Lol.

7. Any project in the works?
Well, as I’ve made mention before…this is a Five book Series. Book two is titled “Secrets Unveiled” and it picks up right where Roliath left off. Once the editing process has begun for Secrets Unveiled I’ll probably start working on book 4. I’m a bit of a nut and I’m always working on more than one book at a time and I’ve been refraining myself from starting book 4 until I had Roliath published, and a complete draft for editing for book 2. ((I’m almost there, just starting the editing to go))

8. What advice would you give to aspiring writers?
All I have to say is simple. “Never give up!” There are many writers out there who have the talent and love to do it, but often think they could never go anywhere with their ideas and love for writing. It doesn’t matter how long it might take, how short of a chance you might think you have, or what other people might have to say about it. Never give up on what you love to do, whether it’s writing, acting, painting, whatever, it’s up to you keep it going. After all…

“How is one to decide where the limitations start and end, unless they try to break past them?” ~ Schunk-Clubb, Amber. Secrets Unveiled

And now for a game of “Which (Do/Would) You Prefer?”
1. Summer or winter?
Winter

16. To never again eat a piece of chocolate or to never again drink a cup of coffee?
To never eat chocolate. (that’s a no-brainer)

Thank you for joining us, Amber!
Readers: want to connect with Amber? You can find her on Goodreads and Facebook. Also, be sure to check out her author page on Amazon as well as her author website.