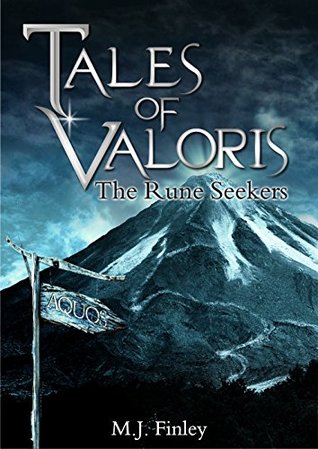 For over two decades, Greemir, the god of creation has raged war on the kingdoms of Valoris in search of the twelve renaissance runes, which can consolidate his power, or destroy him.

Many have sought the runes and failed, some even consider them a myth, including Mikaelis, a diplomat mage who suddenly finds himself entrusted by the goddess of death to find the runes and restore balance to Valoris.

Accompanied by six warriors of different classes ranging from an assassin to a priestess, he must follow the writings of an ancient book to locate the runes, unaware that a second book exists and that Greemir has it.

Throughout his journey over a land of contrasting sights and ancient mysteries, Mikaelis will need all his diplomatic skills and help he can muster to overcome the challenges presented along the way while he desperately tries to find a way to reconnect to his daughter after fourteen years of separation. Every new rune found only increases Greemir’s wrath and his effort to beat Mikaelis to the next location.

Coffee with Architects of Worlds Afar is pleased to introduce M.J. Finley, author of the fantasy novel Tales of Valoris – The Rune Seekers. (Aspiring writers, gather around! You won’t want to miss this interview; M.J. offers some truly invaluable advice to all who are considering penning stories of their own.)

1. Tell us a little bit about yourself.
My name is Michael John Finley and I was born in British Guyana. I currently live in Brazil working as a teacher of English and a translator. I divide my time between classes, translations projects, and my passion, writing.

I’m what you may call a late bloomer, as I only started writing a few years ago. My parents were avid readers and the house was always full of books, so it just seemed natural that I would take a liking to reading. I have read most of the classics like Jules Verne, Victor Hugo, Agatha Christie, Herman Melville, among others, and despite their wonderful stories, I always wondered what could have happened if the hero failed to complete his mission or a character had different traits than those presented by the author.

I hold a bachelor’s degree in business and an MBA in international trade, and for most of my live I was a logistics manager. Thus, writing could not be farthest from my mind. I always admired those who write, but never thought of it as something for me. Life however has a curious habit of shifting things around and one day I decided to put a few short stories to paper and discovered the wonders of writing. What started as an experiment in writing soon became something much more serious as I kept at it. Even so, until that point, I had never considered printing any of my stories. They just seemed frail, lacking something that could make them stand on their own.

The reason for this, I found out later, was that the stories were actually small parts of something bigger, so one day my daughter suggested that all the stories would make more sense if I gave the characters a common goal, like a quest, and that brought everything into perspective. That was the genesis of my first and only book thus far, Tales of Valoris – The Rune Seekers. What began as a single book soon evolved into a five book saga, most of which is still in my mind, but I’m working on getting it out.

3. Why did you start writing?
Well, I was always a huge fan of RPG games and one day I asked a friend what he thought it would be like to be our characters. We began to trade small stories about what we would do and how we would face certain challenges in the game. From those discussions, I began to write small stories, which eventually turned into a novel, and since then, I never stopped writing.

4. Do you recall the moment you first conceived the idea for your novel?
Once I established the goal for my characters, I started to build the story. The funny thing is that much of what I conceived never made it to the book. My characters just followed their own path. Once I finished the first draft, I put it away for seven years, yes, seven years. I was so disappointed in with my story that I just decided to give it up, until I found the old manuscript on my shelf one day in 2012. I read it and shuddered at each page, but something else happened. I saw new nuances and alternatives for the story. Despite all I considered to be wrong, I still thought it had potential, so I gave it another try and this time it came out much better. The characters were, and are, still in charge of the storyline, but I at least have some say in its development.

5. Tell us a little bit about your book’s title.
Valoris was a name that just popped in my head when it came time to name the place where my stories take place. With all the magic, adventure and the kind of quests my characters face, their valour seemed quite important. Now, once the land was named, what to call the book? Well, since it was going to be a saga, why not the tales of that land. Hence Tales of Valoris, followed by the name of the adventure each book holds.

6. Does your story have a moral?
To be honest, I never thought about incorporating any kind of moral in my stories. I like to think that if the reader finds a message in my writing, I’m glad to be of service.

7. Of the characters you’ve created, which one is your favorite?
This is a tough one. It is like asking a father to pick his favourite child. My characters are usually based on people I meet so when it is time to create one, I use the person that is closest to what I need and bring the character to life. I must note however, that only one of my characters came out the way I planned it, the others all took on different traits from what I originally imagined.

9. What does a typical writing session look like for you?
My writing sessions usually take place in the morning, after my first classes and accompanied by a nice cup of tea or coffee, whatever is available. Since I’m seldom at home in the mornings, I usually write at a café close to where I teach. I plug in my earphones, select an instrumental music radio, and just let the words flow. I never set any kind of limit or goal for my writing as I’m never sure how long I will be at it.

10. How do you feel about outlines? Are you for or against them?
I wrote my first book using a mixture of intuition and basic outlining. That resulted in a mass confusion of conflicting timelines and scattered characters. For my next book, I decided to use the outlining method. Now, I know that outlining is an ample word used to express a variety of methods authors use to prepare their next story. For me, the outline works as a first draft setup. Instead of using post-its, drawings, or even storyboards, I actually write down the sequence of events that will take place in the story, including subplots, twists and the end. Once I’m satisfied with the results, I can start writing using the outline as a road map to the end of the book.

11. What is your favorite book genre?
Although I write fantasy, it is my least read genre. I prefer mystery, crime, thrillers and horror to read.

12. What are you currently reading?
I’m currently reading Deception Point by Dan Brown. I recently finished The Physician by Noah Gordon, and I have my sights on Heirs of Power by Kay MacLeod.

13. What is your favorite book?
It is very hard to choose among so many good books that I have read, but if I had to choose one it would be The Three Musketeers by Victor Hugo. From the construction of the story to the character development and storytelling, the book is a masterpiece in every aspect. I read it the first time when I was still a teenager and just could not put it down. I only regret not knowing enough French to read the original.

14. Any project in the works?
I’m working on the sequel to Rune Seekers, which I hope to publish during the first semester of 2017.

15. How long does it usually take you to write a book?
It would usually take me between ten months and a year to finish a book. Most of that time is spent in editing.

16. In your opinion, what makes a story ‘good’?
There are two elements that always grip me in a book, the narrative and the character development. If I like these two elements, I will most likely enjoy the book.

17. What advice would you give to aspiring writers?
Throughout my short career, here is what I have learned:

Persevere, always. There is no shortage of people who don’t understand your work or are just itching to criticise you, so believe in yourself and plough though.

Study: Some of us are talented in many ways, even with words, however, I have learned that talent alone is not enough. Read about the craft (On Writing – Stephen King is an excellent starting point), join other authors and learn from them, the more you understand your craft, the better you will be at it.

False Gurus: Be wary of these, especially those who tell you that you should write for a certain audience, or have a certain group in mind when you write. I’m my experience, trying to do that is the equivalent of guessing the lottery numbers. Write what you want and because you enjoy it. I believe there is no such thing as a bad book, only books without readers. I have read praised books which in my opinion, were rather lacking at best, and disregarded books that turned out to be fantastic. Therefore, how can you choose an audience, just write and have fun.

And now for a game of “Which Do/Would You Prefer?”
1. Books or movies?
Movies

4. Nights out or nights in?
Nights in.

6. Having telepathy or having telekinesis?
Telepathy.

8. Making a phone call or sending a text?
Phone call.

9. Working in a group or working alone?
In group.

10. Losing all of your money or losing every picture you’ve ever taken and every picture that has ever been taken of you?
Losing the pictures.

Thank you for joining us, M.J.!
Readers: want to connect with M.J.? You can find him on Twitter, Goodreads, and Facebook. Also, be sure to check out his author website.