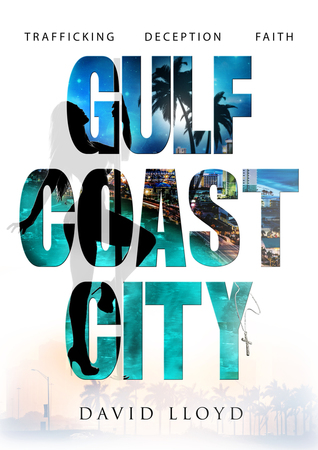 After witnessing a brutal attack, aspiring young pastor Jacob Carmichael is troubled by why there is so much evil in the world. His journey of self discovery takes him out of the comfort of his small town in South Carolina to Gulf Coast City, Florida. He soon finds himself in a world of human trafficking and deception that he can not escape. In order to find peace and happiness, he must find a way to help the victims while he struggles to maintain his own faith, sanity and sobriety.

It is my pleasure to introduce you all to the author of Gulf Coast City, David Lloyd!

1. Tell us a little bit about yourself.
I was born in Warrington, England but grew up in Summerville, South Carolina. I attended Francis Marion University and I have a Bachelor of Business Administration. After selling my employment agency, I moved as far south as I could. I am now in my fifties, happily married and enjoying life in Southwest, Florida.

I enjoy tennis and writing. I am in the final stages of my first novel called Gulf Coast City which was influenced from running an employment agency that provided temporary staff for anything from hotel housekeepers to exotic dancers and everything in between.

2. When did you start writing?
I owned an employment agency in Southeastern, United States.  The people that would apply for work there were some of the most interesting human beings I’ve ever met.  They were from all over the world, who came to this resort city every summer for the tourists season.

At the time I was single and very much enjoyed meeting some very beautiful young ladies from Russia, Estonia, Belarus, Poland and Colombia just to name a few.  These girls and guys were in the United States for approximately 6 months on what’s called a J1 visa.  The J1 is call the work and travel visa and is given to university students from foreign countries so they can work in the USA then travel around and experience the American culture.

When I was at full capacity during the season, my employment agency employed around 100 people.  Almost all of them were not from the United States.  This really made things interesting for me and my office staff.  There was never a dull moment at work and something crazy happened just about every day.  After I sold my business, I decided I could not keep quiet about my experiences so I put my love of writing to work and created the novel called Gulf Coast City.  The story is fiction but is based on the events that took place during the tourists seasons at my employment agency.  Even though I made up this story it could very easily be true and if you ever came to the USA to work on a J1 visa or have ever lived in a tourist town, I’m sure you will relate to this novel.

3. Do you recall the moment you first conceived the idea for your novel?
I used to tell my friends and family about all the crazy events that would happen at my employment agency.  One day one of my friends said, “you should write a book.”  And the rest is history.  I combined my love of writing with several great actual events and developed a great story.  At first the main character was only down in Gulf Coast City on vacation.  Then I decided to spice it up by having him search for answers to his faith.

4. Tell us about your book’s title.
Gulf Coast City is a fictional town.  So many bad characters and and bad things happen in this town that I couldn’t use a real one.

Were there other titles which you were considering?  I was considering calling the book underbelly because the story is about the devious underbelly of a tourist town.

5. Does your story have a moral?
The moral of this story is always look over your shoulder.  You never know when evil will present itself.  To quote the bible:  “be sober-minded; be watchful. Your adversary the devil prowls around like a roaring lion, seeking someone to devour.”

6. Of the characters you’ve created, which one is your favorite?
The main character is Jacob Carmichael.  He is 21 and studying to be a pastor at Bob Jones University in Greenville, South Carolina.  He is young, naive and from a small town.  At the very beginning of the story, someone very close to him is beaten and robbed and he blames himself.

He is in his last year of studying theology but can no longer focus on his assignments.  He questions why God would allow so much evil in the world and tries to numb his pain with alcohol.  Trying to comfort Jacob, his pastor recommends he visit Gulf Coast City where he can meet with someone who will help him with his struggles.

7. What does a typical writing session look like for you?
For me working from an outline is totally boring and does not get the creative juices flowing.  When I write, I like to sit in the dark and complete silence.  Then I start typing on my computer until I have totally lost myself in the story.  Sometimes my wife comes in to see if I’m still breathing and it takes a little while for me to come back to reality.

8. Which genre do you prefer to read in?
Crime, Horror Thriller

9. Which genre do you prefer to write in?
Crime, Religion, Romance

10. What are you currently reading?
I’m in the middle of Dr Sleep by Stephen King.  This is a gritty kind of out there book that is the sequel to The Shining.  Danny is now in his twenties, an alcoholic and dealing with his powers.

11. Any project in the works?
I’m in the very final stages of writing my first novel, Gulf Coast City. The latest draft recently came back from the 5th beta reader. Luckily he didn’t beat up on me too badly, so I was able to make some quick changes.  Now the manuscript is with Deb Rhodes of Better Beta Reads who is doing the line editing. The finished novel will be somewhere around 385 pages and is scheduled to be published through Smashwords this December.

12. How long does it usually take you to write a book?
I’ve been working on this book for seven years.

13. In your opinion, what makes a story ‘good’?
Here’s a fantastic quote by James M. Cain, author of Mildred Pierce and the Postman Always Rings Twice.  “If your writing doesn’t keep you up at night, it won’t keep anyone else up either.”

14. What advice would you give to aspiring writers?
Every author is different and I’m probably too new to the scene to give any kind of extensive advice. But I will say this, don’t go with the first self-publishing company that looks good. In fact if you know your way around the internet then you can pretty much do it all yourself. Createspace and Smashwords are simple and inexpensive.  Beta readers and line editors are out there. And cover designers are too. The best books I read on marketing your book were written by Joanna Penn. Get yourself an author website, Facebook page and get on Goodreads. I have found most of the people on Goodreads are very helpful as long as you don’t ram your book down their throat.

3. Summer or winter?
Winter but only because I live in Florida.

8. Making a phone call or sending a text?
Text

9. Staying in a hotel or going camping?
Hotel

10. Working in a group or working alone?
Alone

15. Spending half a day locked in a coffin (there would be a hole for air, of course) or spending two days trapped at the bottom of a well?
Bottom of a well

Thank you for joining us, David!
Readers: want to connect with David? You can find him on Goodreads and Facebook. Also, be sure to check out his author website.