Adam Silfven’s debut novel, The Lost Son of Woodridge, hit virtual shelves just over a month ago. If you’re fond of suspense or contemporary fiction, stick around to learn more about this intriguing new release. 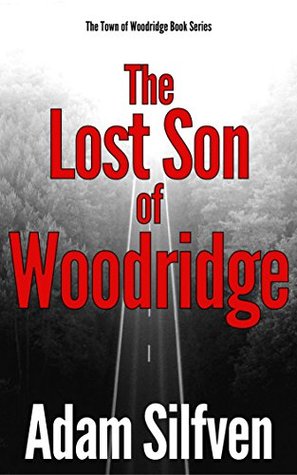 A young woman is attacked by her boyfriend. Break-ins are happening all over town. A boy is taken from his home. All of these crimes are blamed on Robby Hetfield, a nice guy who’s never caused anyone a bit of trouble.

When all the townspeople of Woodridge, Colorado turn on him, even his own parents and his best friend, Robby leaves town and flees deep into the woods of the Rocky Mountains. He has no idea how he will survive, but feels the need to stay near his sister Laila, the only one who believes him. Or, so he thinks….

Deputy John Ochalek doesn’t believe Robby’s girlfriend’s story, but he just can’t prove she’s wrong. Surprisingly, the young woman’s father, TJ Lewis, agrees with him and together they set out to discover the truth. Can they prove Robby’s innocence and catch the real culprits? Will they find his hiding place in time to protect him from the angry townspeople? And, by saving Robby, can they save the town of Woodridge, too?

1. Tell us a little bit about yourself.
Hello! I’m a man who wears many hats, but my most favorite ones are those of Husband and Father. My beautiful wife and I have 7 children, four boys and three girls, who add color to our lives in so many ways! We all live in Windsor, CO, a great little town about an hour north of Denver. I currently work at a pizza restaurant part-time while trying to make this writing thing take off, though I am also considering getting into teaching full-time, too.

2. When did you start writing?
I started writing when I was young, losing myself in the various fantasy worlds I created in my head. They were often far more interesting to me than reality. Professionally, I started writing on September 18, 2016. That’s the day I left my steady job, which I despised, and decided to take a shot at a lifelong dream. It’s been a wild ride, and while financially it is not what I expected, that was never the point in doing this to begin with.

3. Do you recall the moment you first conceived the idea for The Lost Son of Woodridge?
I was reading an article in GQ a few years ago, and I let my mind wander. Over time I thought about what it would be like to live in the woods, and what would motivate someone to do that. It formed into something completely different from the original story, but there are still elements of it tucked into my book.

4. How did you arrive at your book’s title?
The Lost Son of Woodridge went through through quite a few changes. Originally titled The Hermit, I felt that didn’t convey the feelings of both the protagonist Robby Hetfield or the town. The current title expresses his feelings of being emotionally lost and betrayed.

5. Does your story have a moral?
The book deals with the way that we treat each other, and how judgmental people can be. Robby is accused of a crime he didn’t commit by his girlfriend, and almost immediately, his world falls apart around him. I feel we have all been in a situation like that and have often felt like running away from it. Robby does that, and along the way discovers who he really is, while the Town of Woodridge begins its own transformation.

6. Of the characters you’ve created, which one is your favorite?
TJ Lewis, the father of Shaina Lewis, the antagonist and Robby’s accuser, is by far my favorite. I see a lot of myself in him, as a man who is in a tough position, yet still willing and wanting to do the right thing. His daughter accuses Robby of raping her, but he isn’t willing to blindly believe her when the story doesn’t add up. He will be a major part of the next two books in The Town of Woodridge Series.

7. Using five words or less, describe the protagonist in The Lost Son of Woodridge.
Scared, lost, determined, strengthened, found (in that order)

8. What does a typical writing session look like for you?
When I’m writing, I’m in my office, alone in the corner. The music is cranked to drown out everything else. My phone is somewhere else, and the door is closed, and I wrote until I’m finished. No goal, no word count. I know when I have written all the good things that are going to come out of my head for that day.

9. How do you feel about outlines? Are you for or against them?
I believe in outlines, though maybe not in the typical sense. You need to do it how it’s going to work for you. Mine was a 5,000 word “story sketch”, along with a “character sketch” that detailed so many things like each characters age, height, weight, education and relationship ties to every other character. That alone was almost 10,000 words despite so little of it actually being presented anywhere in the book. After all that I hand drew a map of the town itself and taped in on the wall above my monitor for constant reference.

10. What is your favorite book?
My favorite book is On Writing by Stephen King. It inspired me to take writing seriously. After that, the Game of Thrones series by George RR Martin, which taught me about character development and storytelling.

11. Any project in the works?
I am currently working on a love story about a man whose wife dies in a car accident. It addresses the stages of grief present in the beginning and end of their relationship, and will explore what it means to love someone. That will be followed by a second book in The Town of Woodridge Series featuring Rachel Warner, a character in The Lost Son of Woodridge, who finds herself entangled in a couple of deaths that may not be what they seem. This coming summer will see at least one children’s book, written by me and illustrated by my wife, who is an amazing artist. By next winter, I’d love to have completed the third Woodridge book about a mysterious hitchhiker who finds his way to the small mountain town and uncovers many of the secrets that have been plaguing the town in the first two books.

12. How long does it usually take you to write a book?
My first book was written during a whirlwind period when I wasn’t working anywhere else, and it took me just less than a month to complete the manuscript. The rest of the process took a bout another month, thanks to the tireless and relentless editing by my mother, and the hard work my beta readers put in. Between them all, The Lost Son of Woodridge went through its final transformation into something I am very proud of.

13. In your opinion, what makes a story ‘good’?
A story will be good when the writer believes in what they are writing. It’ll be great when everyone else does.

14. What advice would you give to aspiring writers?
Write. A lot. Believe in yourself and your work. Connect with other writers, they are invaluable. Write for your readers, but for yourself first.

And now for a game of “Which Do/Would You Prefer?”
1. Books or movies?
Books, then plays, then movies

8. Being Spider-Man for a day or being Batman for a day?
Spider-man, much more fun

11. To speak using ONLY rap lyrics (from songs released in the 21st century) or to speak using ONLY quotes from Austen’s books?
If you had one shot,
One opportunity,
To seize everything you ever wanted,
In one moment,
Would you capture it?
Or let it slip?

13. Drinking a glass of expired, curdled milk or eating a bowl of cold, slimy worms? (Note: the worms would be dead, though not cooked.)
Worms. Even thinking about drinking expired milk makes me sick.