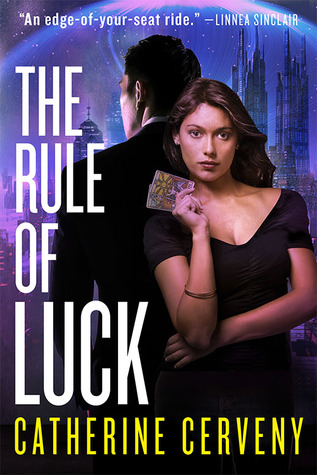 As a famed tarot card reader, all is well in luck and love for Felicia Sevigny, until Russian crime leader Alexei Petriv walks into her shop and demands a reading.

Petriv’s future looks dark and full of danger, which wouldn’t be Felicia’s problem, except that it’s also aligned with hers. Felicia discovers she is the key pawn in Petriv’s plot to overthrow the all-knowing government, and she must decide if she will trust with him with her heart, body and soul, before the future of the entire human race collapses around her.

Please help me extend a warm welcome to the author of The Rule of Luck, Catherine Cerveny. Aspiring writers will want to read on; Catherine offers some excellent advice to those who dream of someday getting their own stories published.

1. Tell us a little bit about yourself.
I’m originally from Peterborough, Ontario Canada, but somehow ended up living in the country. I’m not sure how that happened and I’m still not sure how I feel about it. The quiet is nice, but the shopping is terrible. I currently work in logistics, which may be why my stories seem very concerned with planning, organization, and everything being properly coordinated. I have a degree in English and History because I love stories and to me, both these fields of study dovetailed nicely into my love of reading and writing stories. What is History if it isn’t the study of other people’s stories? And English—well that seems self-explanatory. I also have a degree in Library and Information Science, so yes, I am a professional shusher. Ssshhhh!

2. Do you recall the moment you first conceived the idea for The Rule of Luck?
I don’t remember if there was an exact moment where I came up with the idea for THE RULE OF LUCK. I enjoy Tarot cards and I also like hard Science Fiction, and I wanted to combine the two together—like chocolate and peanut butter. I wanted to take something mystical and essentially what Science sees as mumbo-jumbo, hocus-pocus and place it in a hard sci-fi world. Except in this world, it wasn’t hocus-pocus—it was legitimate and accurate. The end result is quite a bit different than my original vision. The novel is set about 800-1000 years in the future, and I’d originally planned on the story being much more dystopian. However somewhere along the way, the story lost much of its dystopian flavor and ended up being more positive and upbeat than I intended. Also, I don’t think I initially saw the story crossing over into Romance as much as it did. That surprised me and took the story in a direction I never thought it would go.

3. Does your story have a moral?
I’d like to think the moral of the story is how can we hold on to our humanity as we become more reliant on computers to the point that we may someday be able to upload ourselves onto the Internet. It’s not really a new idea but I’ve often wonder, how far will it go? Will we lose ourselves in the process? The main character, Felicia, is a Tarot card reader living in a world where people are technologically and genetically modified, and she doesn’t know how she fits into that world. Society is changing and she feels left behind—a second-class citizen in the new world order. I think in relation to that, some of the major themes are Felicia’s feelings of isolation and alienation as she fights to find her footing.

4. What does a typical writing session look like for you?
I like absolute quiet when I write, so it’s probably a good thing I live in the country. Since I have a day job, I do my writing late at night. Most of my writing is done after 9:00 pm, and on the weekends, there are no rules! I’ve been known to start writing at 11:00 pm and write until 5:00 in the morning. I don’t really have a daily word count goal, since I honestly never know how much I’ll get done at one sitting. However, I do have a tendency to get up and wander off in the middle of a scene, leaving it for a few hours or even a day or two. It gives me a chance to think about it for a while and come up with ways I can improve the scene when I eventually get back to finishing it.

5. How do you feel about outlines? Are you for or against them?
Yes, I always have a general outline of the story. Otherwise, I have a tendency to lose control of the story and get off track. I like to know exactly where I’m going. However, that’s not to say there isn’t room for going off course and making modifications.

6. What is currently on your to-be-read shelf?
My to-be-read shelf currently contains about 50 physical books I need to get to. Then I have about 100 e-books I want to read. I also have several audio-books I’m working on too—I have a 45 minute commute to work, and it’s a great opportunity to listen to a book. I compulsively buy books like it’s some sort of addiction and I need an intervention. One of the books I’m currently reading is READY PLAYER ONE by Ernest Cline. I’m also listening to THE COLLECTOR by Nora Roberts. And I’m also looking forward to Karen Marie Moning’s FEVERSONG. Did I mention I read multiple books at the same time?

7. Any project in the works?
The sequel to THE RULE OF LUCK just came out December 6, 2016, called THE CHAOS OF LUCK. So if readers enjoyed the first novel, they can check out the second. It’s set about five months after the events in the first book.

8. In your opinion, what makes a story ‘good’?
I think a story is ‘good’ when the characters stay with you long after you’ve finished the book. You wonder about what happened to them, if they’re okay, are they happy, and what are their lives like after the story is done. It’s nice to have a moral or be introduced to new ideas you’ve never thought about before, but really, it’s the characters that matter to me. Did I care about them and was I engaged in what happened to them? If so, then the story was ‘good’.

9. What advice would you give to aspiring writers?
I know this is terribly clichéd but honestly, never stop writing. Take courses. Find a writing group. Get a critique partner. But never stop writing, because if you only treat it as a hobby, that’s all it will ever be.

And now for a game of “Which Do/Would You Prefer?”
1. Books or movies?
Books (obviously)

Thank you for joining us, Catherine!
Readers: want to connect with Catherine? You can find her on Twitter and Goodreads. Also, be sure to check out her author website.