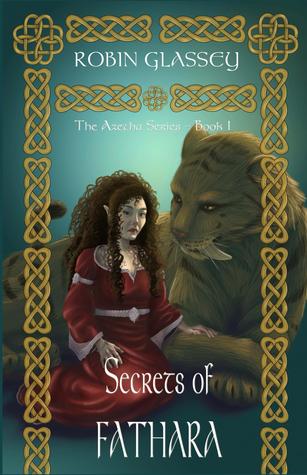 Tika is not like the other princesses on Fathara. With her wild hair, pointy ears, and disheveled appearance (not to mention the collarless sand tiger who follows her around), it is hard for her to make and keep friends. To complicate things further, Tika discovers she is more than Human, with surprising abilities. And all she wants to be – is normal.

Yet the very abilities that set Tika apart are the very things that Fathara needs to save it from destruction. For Mortan has been searching for Tika … and he wants her dead.

Allow me to introduce you all to the author of Secrets of Fathara, Robin Glassey.

1. Tell us a little bit about yourself.
I grew up in Pickering, Ontario—a little town outside of Toronto. I always joke about growing up across from a nuclear power plant and having the ability to shut down electrical gadgets/computers etc., but my husband and kids will tell you it happens around me all the time. I wouldn’t call it a superpower exactly, more of an annoying curse. I call Utah my home now, and moved here back in 1994 as a transfer student to BYU. The move became permanent when I married Brett Glassey. We have four boys, three of whom are adopted through fostercare. I love to watch Doctor Who with my family, eat french fries (especially with gravy on top) and of course, write books.

2. When did you start writing?
The Azetha Series first came to life when my most recent fosterdaughter returned to her birthfather, back in the spring of 2010. Even though I had anticipated she would leave our family, I still struggled with the grief of losing her.  One day before my husband left for work, he suggested I try writing my own fantasy story—like one of the many books I love to read.  I had no idea that picking up a pen and a notebook that day would change my life and begin to heal my heart. Those twenty pages I wrote on that first day became a part of my novella, The Least of Elves.

3. Does your story have a moral?
I would say that the overall moral of The Azetha Series is to accept yourself for who you are. Too often we spend so much time looking for the approval of others, instead of appreciating our own uniqueness and talents.

Some of the major themes present in the series are light versus dark, death, betrayal and forgiveness, faith versus doubt, and empowerment.

4. Of the characters you’ve created, which one is your favorite?
One of my favorite characters is Eno, a talking lizard. He appears in the second book in the series, The Veil of Death, as Tika’s guide through the Swamp of Tears. I love Eno because he’s a reluctant hero. You never know if he will abandon you or save you. He’s chatty, cowardly, funny and overall quite endearing, even if he did blackmail his way out of the swamp. I can never seem to get mad at him, no matter what he does or says.

5. How do you feel about outlines? Are you for or against them?
There are those who hate outlines, preferring to write by the seat of their pants. I live by a planner and checklists to help keep me on track and on time, so outlines help guide me through my stories and keep me going in the right direction. But I’m not so tied down with an outline that I believe I should keep strictly to it. Every so often a character or an event will surprise me and change things, making me adjust my story in ways I never imagined.

6. Any project in the works?
I have a couple of projects in the works. One is a middle grade series called The Perils of Ponderitch. I’ve already completed the first book in that series and am shopping it out to agents. The second book in the series is almost complete and I’ve even started an outline for the third. I’ve also started a near future YA novel based on a world where the US is run by a corporation. Ironically, I began writing this before I discovered the series Incorporated. And my third writing project is about a boy who wants to become a dragon. I’ve discovered that just like when I used to quilt, I can’t seem to work on just one writing project at a time. It must be my ADD.

7. In your opinion, what makes a story ‘good’?
I think what makes a story good is when the reader gets “lost” in the story. The world feels so real and the dialogue so natural they forget they are reading a book. When I keep coming back to a book again and again, then the author has struck a chord in me that has me returning and rereading, enjoying the words one more time.

8. What advice would you give to aspiring writers?
Don’t give up. And while it’s exciting (and scary) to share your work with others, don’t rush so fast to get your story out there that you skimp on editing. You risk losing your audience by doing so. Find other authors to exchange your writing with and go to plenty of classes and conferences to hone your skills and learn how to improve your writing.

And now for a game of “Which Do/Would You Prefer?”
1. Dogs or cats?
Cats. That probably sounds stereotypical as I’ve seen many pictures of writers with cats, but I grew up in a family that loved cats and had seven throughout the course of my childhood. The irony is, I have none now. My husband is a dog lover and seeing as we can’t agree on a pet, our home is a pet-free zone.

2. Ebook or physical book?
I choose both. I love the feel of a physical book in my hands and there are certain books I just have to have in my collection because I know I will read them again and again. I also love the convenience of Ebooks on my phone for when I have to go to a doctor’s appointment or waiting for kids to come out of school during carpool pick up. My purse is crammed with so many things (too many things according to my husband) that adding a physical book would tip the scales, cause the universe to explode or at the very least my purse to self-destruct.

4. Making a phone call or sending a text?
It took me a long time to learn how to text because I’m not technologically savy. But texting has become my friend and choose it over phoning in most cases when the message is short and simple.

5. Travelling by car or travelling by airplane?
Is beaming technology an option? Because I choose that. I love to travel, meaning going to new places, but hate the process of getting there. The older I get the more aches and pains I discover, making it uncomfortable to travel. Airplane over car, for sure, but I’m still hoping scientists come up with a faster way soon.

6. Staying in a hotel or going camping?
I choose hotels over camping anyday. Although I camped a lot as a child, I love modern conveniences: flushing toilets, running water, and beds—yes, beds. My husband calls me the princess and the pea. I have to have everything right in order to sleep at night.

7. Losing all of your money or losing every picture you’ve ever taken and every picture that has ever been taken of you?
I would rather lose all of my money, after all, you can make more money, but you can’t go back in time and retake pictures (and I have thousands and thousands of pictures). Every year my computer starts screaming at me that it’s too full and I have to dump the images to an external drive for safe keeping.

8. Reading or writing?
When I was a kid I would have chosen reading because I hated writing, but now I chose writing. It’s one of my favorite things to do and I actually get grumpy if I don’t get enough time to write.

9. To speak using ONLY rap lyrics (from songs released in the 21st century) or to speak using ONLY quotes from Austen’s books?
I love Jane Austen (and the Pride and Prejudice movie and soundtrack is on my iPod to help me fall asleep on our Lake Powell vacations). I can’t even count how many times I have watched the movie, most recently on a flight to Kauai over the Christmas holidays.

11. To never speak again or to never eat solid food again?
I love food too much to go without it, so I would have to choose never speaking again and learn sign language. And my kids would be happy to go without my long lectures when they get in trouble.

12. To never read another book or to never watch another film?
I could sacrifice never watching another film and stick with reading books. Growing up in a house with one tv and several family members, I often went to my room to read instead of fighting for a turn with the tv.

13. Spending half a day locked in a coffin (there would be a hole for air, of course) or spending two days trapped at the bottom of a well?
I would definitely choose to be trapped at the bottom of a well for two days rather than be locked in a coffin for half a day. With my claustrophobia, I couldn’t even make it fifteen minutes in the cabin of our boat on a hot stuffy summer night. I clawed my way out and huddled in a corner to try and stay dry on that rainy night.

14. To never again eat a piece of chocolate or to never again drink a cup of coffee?
This is an easy one. I’ve never had coffee, so I would choose to never drink it and keep eating my delicious Milky Ways. That reminds me, I have a few stashed in a drawer in the bedroom. I think I’ll grab a couple.