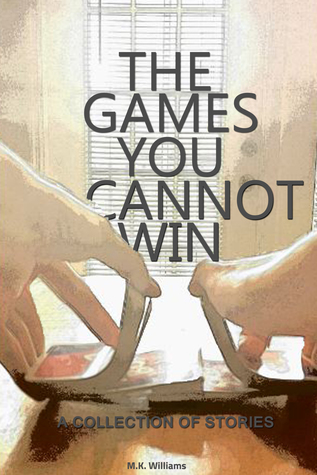 Roll the dice, pick a card, tell a lie, hide the truth. Whatever the move, it’s all just part of the game. Follow the lives of four very different characters who are all trapped in an insidious game. Each story delves into the intricate web of misaligned motives and obscured half-truths.

In This Business
A career hangs in the balance between a wicked deal with a publishing company and a daughter’s loyalty to her mother. As she works furiously to meet her deadline, she debates the impending betrayal: her ambition, or her beloved mother.

The Joker
In the middle of his quarter-life crisis, Randolf, a young reporter, stumbles upon a political scandal so dark and treacherous that it threatens the very fabric of our democracy. Will he reveal the truth before it is too late, or will the innate powers of human nature ruin his story before it is even printed?

Dolly
Katherine Hertzfeld-Doll has just begun her term as a Supreme Court Justice. Before she can even get her bearings she is thrown into a scandal that threatens to compromise her life’s work and end her career. Will she cave under the pressure or will she use her political power to hide the truth?

Escaping Avila Chase
Agent Trevor Hobbertson is about to crack the most important case of his career with the FBI. As he pursues the criminal he is also taunted by vivid memories of his ex-girlfriend. Is that nagging feeling that he is being taunted founded, or is there an evil mastermind lurking behind the scenes and planning his demise?

1. Tell us a little bit about yourself.
I am originally from Philadelphia but, I currently live in Tampa, FL. I have used both cities as locations in my work. In my latest book, The Games You Cannot Win, the last of the short stories is set in Philadelphia. It was wonderful to explore the city again through the eyes of my characters.

2. How different is The Games You Cannot Win from your original vision? That is, did the structure and content of the novel change with the passage of time?
Each of the short stories in The Games You Cannot Win has a very different origin story. In This Business and Dolly were both stories I’d written years ago, and I revisited them last year when I wanted to put the collection together. I ended-up re-writing both to some extent. In This Business was modified and updated. Dolly was completely re-written twice. I have lots of extra bits to the story between the main characters that just didn’t make it into the final cut.

Dolly was initially inspired by that slow burning anger that I often feel as a woman based on how men regard me and other women. What sparked it was when an old friend, or someone I thought was a friend, tried to manipulate me. I felt this very subtle anger about the fact that this person, who was supposed to be my friend, seemed to have no regard for the outcome of their actions. If felt like they just wanted to play some kind of game. From that experience the first version of Dolly was drafted. After several years and experiencing other incidents when I felt that I was being undermined, I realized that the people trying to hurt me would only affect me as much I allowed them to. That made me feel powerful. I had the power to ignore them and keep them out of my life. That was the feeling I was trying to channel in Dolly.

The original concept for Dolly was very one-sided and came from a place of anger. The final product is more nuanced and I think it is much better for that.

3. How did you arrive at your book’s title?
When I was trying to figure out which of the short stories I had written to put in a collection I wanted to find some common thread to tie them together, rather than just putting them all in one book and calling it a day. I selected the four stories that made it into the collection because each one detailed some kind of game that the main character was caught in, real or perceived.

I was initially planning to call it “Modern Games” because none of these stories deals with what people traditionally think of as a game- cards, board games, etc. They all deal with mind-games that people play on each other or with themselves. But I had a small concern that I may run into some issues with the Olympics being considered the Modern Olympic Games. That’s why I decided to drop that as the title and went with The Games You Cannot Win.

4. Do the stories in The Games You Cannot Win have a moral?
Absolutely. Even though these stories are short, I took a lot of care to put a message into each one that was subtle enough to not be obnoxious, but present enough to not be missed.

For the first story, In This Business, I wanted the reader to come away with the sense that they didn’t have to live their lives, or measure their lives, by another person’s definition of success.

For Escaping Avila Chase, I wanted to start to tackle this very complex and massive topic of domestic violence and violence against women. It’s a huge topic and would be difficult to try to capture in one novel, let alone a whole series. So, I took one small notion of the topic and decided to flip it on its head: could a man who hit a woman ever forgive himself, even when society was ready with excuses for him? Could a woman really leave at the first sign of violence and never look back? These are two very charged questions and a small, small portion of the larger discussion, but I wanted to start to tackle it in this story. I think anyone who reads it should feel conflicted and it should make them think a bit more critically about this global issue.

5. What does a typical writing session look like for you?
A typical writing session for me is about an hour at a maximum. Any longer than that and I get distracted or I just trudge through without much creativity. I do prefer to listen to music as I write, I usually create a playlist for each story or novel that I work on so that I can get into the right mindset. I’ve made those playlists available on Spotify for fans to listen to as well.

I could write at just about any time, but I usually have to take the time when I can find it. I keep a journal with me so I can write down ideas when I have them.

6. How do you feel about outlines? Are you for or against them?
I always use an outline! I would just ramble on forever if I didn’t have a clear idea of where I was going. I don’t usually build out an outline until I know how I want to story to unfold.

7. Any project in the works?
Yes, I am working on another full-length novel. This will be another thriller and I am about halfway done the writing process, then comes editing. I seem to be in the pattern of publishing one book a year so I’d like to keep that trend going.

8. How long does it usually take you to write a book?
Even though I have published one book a year for the past two years, I had been working on those projects for about 3 years. Because I have multiple stories that I work on at a time I can start something when I am excited about it and put it away when I lose that vigor. Once I really decide to make a story my main focus however, it takes about a year from starting the outline to final publication with all of the writing, editing, formatting, editing, revising, editing, etc.

9. What advice would you give to aspiring writers?
Keep at it! It may seem like there are so many authors in the world today, and there are, but for each of those published authors (indie or otherwise) there are 4-5 more who talk a big game and have never written a word. Keep writing, keep working at it!

2. Summer or winter?
Summer (that’s why I moved to Florida)

5. Making a phone call or sending a text?
Text!

7. Losing all of your money or losing every picture you’ve ever taken and every picture that has ever been taken of you?
I’d lose the money. I can always make that back.

8. To find true love or to win the lottery?
Both I guess, finding my true love felt like winning the lottery.

12. To never speak again or to never eat solid food again?
Not speaking, I love food too much to choose the other option.

13. To never again eat a piece of chocolate or to never again drink a cup of coffee?
That’s easy, I don’t like coffee at all. I could easily give that one up forever!