Today, I have the pleasure of welcoming children’s author Becky Benishek. Her debut novel — What’s at the End of Your Nose? — hit virtual shelves earlier this year. Before we sit down with Becky, let’s take a quick look at the aforementioned title’s blurb: 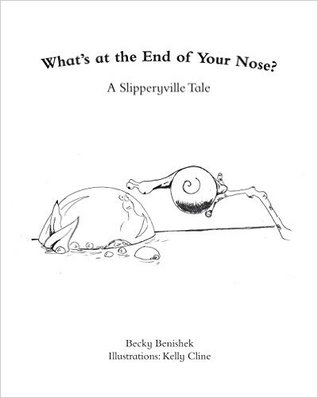 Sidney Snail is so sick of Slipperyville that he wants to go on an adventure—any adventure—anywhere but here! A timely word from mysterious Old Samuel Snail convinces Sidney to give Slipperyville one last chance before he snails out of town. Experience a snail’s-eye view as Sidney awakens the world around him.

Sidney will help show children (and adults!) that they can find magic, mindfulness, and meaningfulness in even the simplest things. All you need is a change of perspective.

1. Tell us a little bit about yourself.
Hi! I’m Becky Benishek, born and raised in Wisconsin. Most of my family is still here and I’ve got a great group of friends, so I’m happy to stay.

College was grand; I went to Lawrence University, which draws in people from all different cultures and countries. I learned as much if not more from my friends as I did studying for my English major. I added in Environmental Science because I wanted to use my words to help animals and the environment. My work career took a different, fulfilling path, but I feel that in writing these children’s books, I am starting to achieve that long-held desire. I’ve started with animals and plan to move on to trees.

I’ve worked at the Crisis Prevention Institute for six years now, doing social media strategy and managing online Yammer communities for our customers to share strategies and success stories. We’re all about person-centered care and safe outcomes for everybody, whether you’ve got an agitated patient in your emergency department, a child with special needs in your classroom, or a client in late-stage dementia who just wants to go home. Our customers inspire us, and my coworkers are amazingly supportive (and excited about my books!).

I love singing and listening to music, playing with my guinea pig, Teddy, who is the latest in a long line of rescue guinea pigs, building intricate Lego structures, beading, going to Renaissance Faires, playing video games, doing logic puzzles, and hanging out with friends even if we’re doing a whole lot of nothing. Libraries and bookstores are my haven.

2. Why did you start writing?
I cannot remember a time when I wasn’t writing. Of course there must have been; but it’s seamless in my mind. It just was always a part of me, something I had to be a vessel for, something I had to get out. I can be just as lazy as anyone, though! When I’m not in the grip of inspiration, plugging away at a plotline is definitely work and takes discipline.

3. Do you recall the moment you first conceived the idea for your debut novel?
“What’s at the End of Your Nose?” happened when I saw a series of photographs about snails that uncovered a whole new world, right down at their level. Unusual things I hadn’t expected snails to do.

The idea percolated in me, ticking over in the back of my mind, and I thought, what if this were just one snail, and this was that snail’s day? Early one morning I got up, sat down at the kitchen table, and wrote the entire story. Writers (and other creative people) can be notorious for self-doubt, but I knew I had something when I finished. And then I had breakfast.

I originally had Sidney Snail coming to his final realization in a slightly different way. After I’d let a little time go by—I always do that when I finish a piece, to clear my mind–it just didn’t work for the character, so I changed it to what you see today.

4. How did you arrive at your novel’s title?
Originally, “What’s at the End of Your Nose?” was called “Sidney Snail’s Great Day.” I had it as the latter all the way up until final editing. For one thing, the title was too close to “Gracie Goat’s Big Bike Race” in my mind, and once that got into my head, I couldn’t shake it. Also, it didn’t really convey what I wanted it to. I wanted the title to be truly evocative of what happens in the story.

5. Does What’s at the End of Your Nose? have a moral?
We live in a fast-paced world. We’re surfeited with things to do, yet still find ourselves being bored. I think that’s because we often take a passive role to being entertained. All these options keep coming at us and we just have to sit back to be served. But then we aren’t really choosing what to do, and so don’t really find what we’re looking for because we’re not actively looking. And we remain distracted and bored. Sidney Snail’s whole journey begins the moment he decides to give his immediate world another try.

It’s important for all of us to slow down, take a look around, and give the seemingly simpler things a chance. We so often miss what’s right in front of us–at the end of our nose!

Here’s a secret: I didn’t think of all of this as I was writing. I knew I wanted Sidney to have a journey. I knew he’d learn something important, something that kids could learn, too. But I didn’t realize the depth of it until after I’d had time to reflect and look at what I’d created.

6. What is your favorite book?
Agh, the desert island question! Yet I can’t help but answer it anyway.

“The Once and Future King” by T.H. White. I didn’t even like it the first time I read it. This wasn’t my King Arthur! I thought, having previously read Malory and Pyle. What’s with all these ants and Merlin’s owl and odd nicknames?

The second time, I was hooked forevermore. That book has everything in it. How to survive, how to listen, how to learn, how to remember. How to look at things a different way. How to realize once and for all that might does not equal right.

All that with an enviable style; yes, this is my desert island book.

7. Any project in the works?
Yes! I’ve started getting my third children’s story ready; I’m targeting Fall 2017. I’ve got a fourth story, a true picture book, next in line. I also have a middle-grade story out to agents and publishers.

When I get through all of those, I’ll focus on polishing and writing more adult short stories, which are intended for a collection.

There’s a passage in Madeline L’Engle’s book, “A Ring of Endless Light,” where the lead character, Vicky, describes how when she’s writing a poem, she’s not thinking about herself, but she’s more herself than at any other time. This always rang true to me.

5. Reading or writing?
Gahh, my brain broke at trying to choose.

6. To speak using ONLY rap lyrics (from songs released in the 21st century) or to speak using ONLY quotes from Austen’s books?
“Certainly, my home at my uncle’s brought me acquainted with a circle of admirals. Of Rears and Vices, I saw enough. Now do not be expecting me of a pun, I entreat.”

9. Having your car break down on an extremely busy expressway or along an abandoned road in the middle of nowhere?
Expressway. Unless I can speak animal language by this point and prevail on nearby deer or hawks to get help.

13. Being two inches tall or being two stories tall?
Two inches tall. This world is still not built for the differently-abled, but I’ve read the Borrowers…

Thank you for joining us, Becky!
Readers: want to connect with Becky? You can find her on Twitter and Goodreads. Also, be sure to check out her blog and author page on Amazon.