Looking for a new fantasy world to cast yourself into? Excellent! Don’t go anywhere. There’s someone I’d like to introduce you to. 😉

In the virtual studio today is Daccari Buchelli, author of Phoenix. Before we sit down with him, let’s take a quick look at his novel’s blurb: 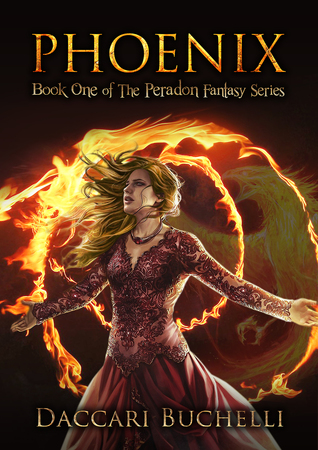 Magic never ceased to bring Violetta joy, until the day it became her curse. Aged fifteen, the young Flame Mage and Princess finds herself drawn to the mysterious and charming Frost Emperor, Ryore.

Torn between her sudden feelings and inescapable duty to the throne, Violetta seeks to strike a balance. Will she surrender her will forever, or strive for freedom by doing the unthinkable?

1. Tell us a little bit about yourself.
I was born in the East of England, into a working class family with four elder siblings. England is a beautiful place in parts, but it has never really felt like home to me. I’ve always longed to travel, hoping to catch a glimpse of more exotic locations.

I enjoy a healthy lifestyle and have loved to exercise since my early teen years. My hobbies include reading, art and design, and the occasion session of nature photography.

While at school, I always showed great promise in the more creative of subjects such as English Literature, and Graphic Design, and received high grades in each of these subjects.

What is peculiar about me is that I have an allergy to silver, so have been branded the nick name ‘werewolf’ from those who know me well.

I have a fascination with the colour green, particular the shade of forested areas, and also possess a great love for all things tartan related.

2. When did you start writing?
From a young age I enjoyed creating my own stories, which by age eight were usually around ten pages in length. I have always been drawn to the subject of magic and would love to live in a Fantasy world with supernatural abilities. As I entered into adolescence, I began to write full length novels and novellas, which ranged from Fantasy to Murder Mystery.

3. Why did you start writing?
I suppose I fell in love with words as soon as I could read. The power that Authors have to transport you into a completely different reality from your own is incredible and have always left me in a state of awe. I wanted to be able to bring others into a similar world, where they could forget their troubles and enjoy themselves, if only for a few hours.

4. Tell us a little bit about your book’s title.
Phoenix was not the first title that I considered for my novel. It was originally published with an Indie company under the heading ‘Sweet Surrender,’ but this title was too similar to novels of an adult nature. When I decided to part ways with the Indie company, I did some research and decided that the title had best sum up Violetta’s character transformation, from a shy girl who doesn’t know what she wants, to a strong and independent woman who is ready to fulfill her purpose and her role as heir to the throne.

Due to this enormous rebirth of Violetta’s character, I opted for the title of Phoenix.

5. Does your story have a moral?
The main lesson of Phoenix is to urge individuals to be their true selves, to try and ignore obsessions that might otherwise steer you into troubled circumstances. Violetta’s character doubted herself from the start of the novel, but we do see her grow into a more confident and able young woman, who doesn’t feel that she has to rely on other people any longer.

Obsession and betrayal by those closest to you are important themes with regards to this novel. Even those who may appear as allies have the power to cause areas of your life to crumble.

6. Of the characters you’ve created, which one is your favorite?
My character Lord Jork, the Lord and ruler of the Air Realm is one of my favourites of all. He is reminiscent of a folklore vampire, with pointed fangs and blood red eyes. His character is particularly complex and we do not learn an awful lot about his background at this point. He is left as a mysterious, yet crucial character in some ways, providing necessary support and guidance to the younger characters within the novel. He sees King Eagan’s family as his own and is a very selfless, giving character.

8. What does a typical writing session look like for you?
I prefer to write when ideas take hold of me naturally, rather than trying to force the material to come at will. I tend to have most of my best ideas in the evening or upon first waking up, so find it best to jot down my thoughts then.

There is something about the night that makes writing seem effortless. Easy. Perhaps it is the fact that most people are sound asleep. I can devour the lives of my own creations, without background interference or passing comment.

I prefer to remain isolated when I write. I like to fully immerse myself in the worlds I have created. In this way I find it easier to get into the mindset of the different characters, to experience what they are going through, both emotionally and physically.

While I prefer to write in the Fantasy genre as it is what I’m most used to, I do enjoy mixing genres and edging into the darkness of thrillers.

When reading, I am more flexible in my tastes. They range from Young Adult to Epic Fantasy, through to Horror, Thrillers, Dystopian and Sci-Fi books.

10. What are you currently reading?
I’m currently reading Tor’s Quest: Book One: The Guide, by Trudie Collins. It makes for an inspiring Fantasy read, with many twists and turns along the way. If you enjoy Fantasy then I would certainly recommend it.

11. What is your favorite book?
My all time favourite book is Sabriel, by Author Garth Nix. It is the first book that drew me into the Fantasy genre and sparked true passion within my soul. From reading this novel, I was able to find my true calling and I couldn’t be happier for it.

12. Any project in the works?
I do have several projects in the works at the moment. I have recently completed the second draft of Book Two of the Peradon Fantasy Series, a sequel to my novel Phoenix. This project has been placed on hold temporarily while I work on improving a Fantasy novella, which I wrote a few years back.

13. How long does it usually take you to write a book?
On average, if I’m writing a full length novel, I will be working on it for around one full year. I average around 80,000 to 90,000 words per each of these novels and write at least three paper drafts before typing them up onto a computer system.

14. In your opinion, what makes a story ‘good’?
A good story involves a combination of factors. You need characters that your target audience can relate to, as well as a unique idea and intriguing plot-line that work to keep your readers hooked. The setting should be appropriate for the content, with a solid theme presented throughout your work.

15. What advice would you give to aspiring writers?
My advice is to always study. Do your research on every element of writing there is. There is always more to learn and new people from which to take advice. Your work can be influenced by other authors which you admire as you develop your own sense of style and structure.

And now for a game of “Which Do/Would You Prefer?”
1. Car or motorcycle?
Motorcycle

3. Having telepathy or having telekinesis?
Telekinesis

7. Being Spider-Man for a day or being Batman for a day?
Spider Man. I have always longed to fly and swinging across buildings would be thrilling.

12. Spending half a day locked in a coffin (there would be a hole for air, of course) or spending two days trapped at the bottom of a well?
Spend a day in a coffin. You would go less time without sustenance and so would likely be in better health.

14. Finding yourself trapped in the universe of The Walking Dead or finding yourself trapped in a slasher film?
In a slasher film, providing I can use my logic to survive. At least then there are less people trying to murder you than there would be in The Walking Dead, where every other human is now a walking, decaying cannibal.