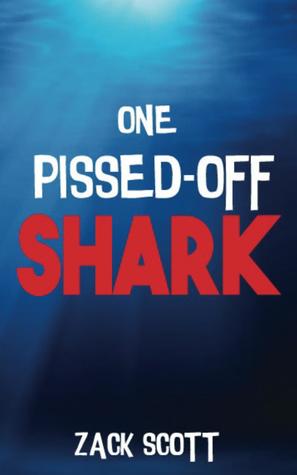 In today’s day and age, parodies abound. Scenes — and sometimes entire storylines — from many contemporary films have been recreated with the purpose of accentuating the ridiculousness underlying them. (It’s all in good fun, of course.) Bearing the aforementioned in mind, wouldn’t it be great if a parody of Jaws existed? I’m glad you think so! One does exist. It takes the form of a book entitled One Pissed-Off Shark. Lucky for us, its author, Zack Scott, is here to discuss said novel. Before we sit down with him, let’s have a look at the blurb for One Pissed-Off Shark :

Friends with anger issues are attacked by an even angrier shark.

Meanwhile, an incompetent shark hunter is hired by a private investigator to hunt down the irate man-eating beast.

1. Tell us a little bit about yourself.
I grew up in Los Angeles and I’m still here stuck in traffic. I went to college at Cal State Channel Islands when the campus was fairly new. The campus was haunted at the time, so my friends and I tried majoring in ghost hunting but the school wasn’t offering any classes. We wrote a movie script instead. Well, half a script. That half of a script turned into a poorly written novel about a killer farmer terrorizing college kids. For some reason that story was one of the inspirations for my zombie apocalypse trilogy Their Dead Lives.

2. When did you start writing?
When I was a kid, I made stop-action, action films with my GI Joe toys. Most of it was improvised but I occasionally wrote something resembling a script. Toward the end of college, I finished my first book Four (Their Dead Lives, 1). FOUR is about self-involved friends who are tasked with saving humanity during the zombie apocalypse. It was always planned as the first book in a trilogy. In between writing Their Dead Lives, I wrote One Pissed-Off Shark.

3. Do you recall the moment you first conceived the idea for One Pissed-Off Shark?
Jaws is my favorite movie of all time. While I was in law school, I thought it would be fun to write an homage to such a classic film. I wrote two versions of One Pissed-Off Shark: the first version was a very serious and dark story with a pretentious title I can’t remember. Then I thought to write a satirical take on survival horror and man vs nature stories. The angry shark was born.

4. Of the characters you’ve created, which one is your favorite?
In One Pissed-Off Shark, my favorite character is Delford. He is well-intentioned, and a good guy, but just can’t catch a break.

6. What does a typical writing session look like for you?
I usually write at night after work or on the weekends. Sometimes I listen to music but it can get distracting. I like to have a bag of parmesan goldfish handy to fuel the brain and my favorite drink: water. I try to write 500 to 2,000 words a day but sometimes that ends up being 3 words or 5,000. It’s fun to write in public or around friends and family, but I’m a loner at heart and enjoy Zack time.

7. How do you feel about outlines? Are you for or against them?
As long as the outline isn’t rude or mean, I’ve got nothing against it.

9. What are you currently reading?
Bull Mountain by Brian Panowich.

11. What advice would you give to aspiring writers?
Just keep writing. Even if it’s terrible.

And now for a game of “Which Do/Would You Prefer?”
1. Books or movies?
Movies. Don’t hurt me.

2. Dogs or cats?
Dogs. Cats are too good at creating deadly traps.

5. Being Spider-Man for a day or being Batman for a day?
Batmobile, baby.

10. Spending half a day locked in a coffin (there would be a hole for air, of course) or spending two days trapped at the bottom of a well?
Bottom of a well. Lassie?!

Thank you for joining us, Zack!
Readers: want to connect with Zack? You can find him on Twitter, Goodreads, and Facebook. Also, be sure to check out his author website.