When her Colombian husband deserts her on his family’s coffee farm in a remote part of the Andes, Alicia struggles to make a life there for herself and her son even as guerrilla uprisings begin to threaten the area, and a nearby volcano rumbles to life. She forms a steadfast friendship with the barefoot housekeeper and a rugged geologist provides a love interest. This passionate story, about a young biologist and a multinational cast of characters, is like a South American “Out of Africa” in the final decades of 1900’s.

Sounds like an interesting read, doesn’t it? With us in the virtual studio is the author of the award-winning novel A Place in the World. Please join me in extending a warm welcome to Cinda Crabbe MacKinnon! 😀 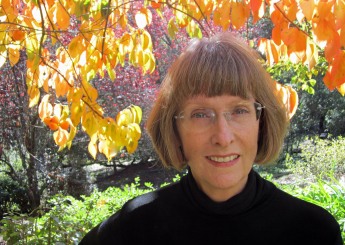 1. Tell us a little bit about yourself.

I grew up in Europe and South America. My dad was in the Air Force and then worked for different embassies; when I was 12 he retired in Costa Rica and I lived there the longest, so I used to say I was from Costa Rica. Americans didn’t believe me, maybe because I have light hair and eyes, but interestingly, Spanish speakers did!

I have lived in northern California for so long now I tell people I am from California.

I photograph wildflowers and study French.

I am a retired hydrogeologist. I volunteer now for a local creek group; we are trying to restore our downtown stream, which is partially encased in broken concrete. I majored in Geology and Biology which I sprinkle into my writing (a cloud forest features so prominently in A Place in the World that one reviewer called it a character.)

I wanted to be a rainforest biologist and that didn’t work out, but the novel gave me a chance to research and write about rain forests.

For years I was a volunteer with Guide Dogs for the Blind, which involved (before they begin their formal training) teaching the puppies how to behave in public and getting them used to every situation they might encounter, including traffic, loud noises, elevators, restaurants etc. A couple of our “puppies” are still “working” for people who love them.

I have a fun Pinterest site, “Readers, Where in the World are You?”  where I ask readers to submit a picture of themselves with my book or any book. I have photos sent by people as far away as Japan and England.  If interested in adding to my photo “collection” please let me know!

2. When did you start writing?
I think I’ve been a story-teller since I was a kid. I used to make up stories for my little brother – he was a wonderful audience and hence the first person to encourage me! I submitted my first short story when I was 12 or 13.  Another short story, published in “Bacopa Literary Review” with a collection of other authors a few years ago, won honorable mention with GlimmerTrain Press.

3. Why did you start writing?
There are a couple of answers here: a.) I just did; without thinking about it, almost as a compulsion. I always had a story in my head that wanted to get out; b.)The other answer is a common one with writers whether we know it when we start or not: it is a way to process information, understand our own lives and share experiences and bits of knowledge we find interesting.

4. How did you arrive at your book’s title, A Place in the World?

I came up with it fairly early as the setting, a coffee finca (farm) surrounded by cloud forest, became a key element.  It is a double entendre because the story is about a young woman finding her “place in the world.”

Briefly, I thought I might call it A Woman without a Country, because the protagonist is seen as a foreigner wherever she lives and feels like a foreigner in her parents’ home country because she has never lived there.  I ended up using that for a chapter heading instead.

5. Of the characters you’ve created, which one is your favorite?
Carmen is the barefoot woman who has worked for this Colombian family since she was a teenager. She is ever cheerful despite a tough life. Carmen befriends Alicia (the protagonist) who is a young mother without any relatives and living in an isolated place.  All of the other characters are fictional, but Carmen is based on our housekeeper who was so kind to me when I was a teenager.  This is my tribute to her.

6. Let’s talk about what a typical writing session looks like for you.

Sometimes I’ll listen to something like Mozart (studies show his music stirs creativity).

I sit down after breakfast and write most of the morning and sometimes after lunch, but I tend to be brain dead as the afternoon progresses. If the house happens to be quiet I’ll write for an hour before dinner, but most often I start again after 9pm. I get a lot done on planes and on vacation.

7. How do you feel about outlines?
I start out just writing scenes as they come to me and at some point piece them together through an outline to organize the plot.  This is what works for me.  I think an outline helps at some point structure a novel and allows you, for example to go back and foreshadow, but starting out that way would give me writer’s block!

8. What is your favorite book genre?
I love historical and multicultural fiction.

9. What is your favorite book?
I have more than one, but my favorite author is John Steinbeck. I love East of Eden, Mice and Men  and especially… Cannery Row – one of my all-time favorites because the characters and setting (Monterey, California) are magnificent! At the time I discovered it I was living in Latin America never dreaming someday I would live in California.  Many years later I worked in Steinbeck’s Salinas Valley and had the feeling I’d “come home.”

And now for a game of “Which Do/Would You Prefer?”
1. Books or movies?
Both!

3. Summer or winter?
Spring ( ok if I must pick I guess summer)

7. Having telepathy or having telekinesis?
Telepathy

8. Making a phone call or sending a text?
Text!

10. To find true love or to win the lottery?
Love.

13. Having your car break down on an extremely busy expressway or along an abandoned road in the middle of nowhere?
Expressway

14. Staying awake for forty-eight hours (continuous) or walking for twenty-four hours (also continuous)?
The former (you have to stay awake to walk anyway!)

15. Drinking a glass of expired, curdled milk or eating a bowl of cold, slimy worms? (Note: the worms would be dead, though not cooked.)
Curdled milk

Thank you for joining us, Cinda!
Readers: want to connect with Cinda? You can find her on Goodreads and Facebook. Also, be sure to check out her author website/blog. Interested in purchasing a copy of A Place in the World? Click here for a physical copy. Click here for the e-book.